A new BLCS Outreach Fund has been setup. The Outreach Fund aims to support all outreach activities that involve, to a significant extent, liquid crystal science and applications. The fund is open to all members of the society allowing members up to £200 per year. For more information please see the opportunities page and application form. 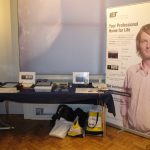 16th May was the UNESCO day of light, one of the goals being to enhance public awareness of how light based technologies touch our daily lives.  16th May is also the anniversary of the first successful operation of the laser in 1960.

To support the day of light ‘Lighting up the RAMM’ took place on the 18th May at the Royal Albert Memorial Museum in Exeter.  Free and open to the public this drew in a diverse mixture of locals and visitors to the city; from professional scientists and engineers to young families.

Coordinated by (EUOPS) Exeter University Optics and Photonics Society there were a number of demonstrations throughout the museum covering Virtual Reality, hands on optical fibre and endoscopy demonstrations and Polarised Light.

In association with the IET and SPIE the BLCS supported display material and demonstrations of Light, Polarisation and LCDs.  A table top presentation by Garry Lester used desktop sheets with text and diagrams to provide a backdrop to hands on demonstrations of polarised light and applications.

Some of the material would be familiar to those who have attended the BLCS winter workshop over the years!

Even the most ‘unimpressed by science’ were, perhaps grudgingly, intrigued at being able to see the patterns of molecules moving in their hands through stress birefringence or the numbers on their calculator display only appearing ‘magically’ with polarisers.

For people interested on how the BLCS can support your outreach, please contact the any of the committee members.