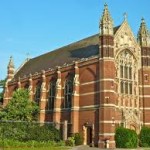 The annual meeting of the BLCS this year took place on 25-27 March 2013 in the picturesque Selwyn College at the University of Cambridge – a place with perfectly manicured lawns and catering staff we’re not like to forget for quite some time. This year the BLCS conference was to lead directly onto an afternoon mathematics session held by the Isaac Newton Institute, which proved popular. As usual the whole event was alive with exciting and enthusiastic talks, followed by equally lively discussions in the bar afterwards! 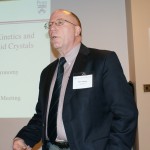 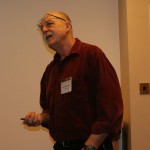 The first ever BLCS Distinguished Lecturer title was given to Professor Peter Collings, who did not disappoint with his talk ‘The Assembly/Disassembly Kinetics and Elasticity of Chromonic Liquid Crystals,’ overviewing some of the work he and his group have completed on chromonic liquid crystals. This talk was swiftly followed by Professor Gordon Tiddy who gave a memorable talk full of dry wit and good humour about his own experiences with chromonic liquid crystals and the dye sunset yellow. Professor Peter Palffy-Muhoray kept the audience enthralled with this year’s Sturgeon Memorial Lecture, for which he gave a talk entitled ‘Solid Liquid Crystals’ (the term ‘liquid crystal’ clearly wasn’t oxymoronic enough) which included quite amazing videos of liquid crystal elastomer films with the ability to swim and fly. 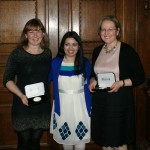 The George W Gray medal was awarded to a deserving Professor Helen Gleeson, whose fascinating talk gave us a flavour of her research over the years, including biaxial nematic systems and optical tweezing of particles in liquid crystals. Dr Isabel Saez kept her speech short and sweet as she collected the Cyril Hilsum Medal at the conference dinner for her contributions to the field of liquid crystals throughout her career so far, in particular her work with clusters, dendrimers and nanoparticles. The Young Scientist award was awarded to Dr Sarabjot Kaur, who gave a presentation detailing her work with bent core systems entitled ‘Going round the bend! How bent molecules affect the properties of nematic liquid crystals.’

The standard of talks this year was very high, showcasing innovative results and spanning broad subject areas including supermolecular liquid crystals from inorganic clusters, T-shaped benzothizole compounds and simulations of blue phases in external fields. Kirsty Holdsworth took home the prize for best talk with an interesting presentation (if I do say so myself) entitled ‘controlling the director configuration in nematic polymer particles’.

The poster session included 26 posters spanning all possible disciplines surrounding liquid crystals and some provoked lively discussion (granted the wine may have helped). The best poster prize was awarded to Harry Milton from Manchester University for his poster titled ‘Assessment of liquid crystal lenses for contact lens use’.

As is tradition, the BLCS AGM would have been quite amiss without the closing presentation by Dr John Lydon, complete with poem. This year he took us through history, from nature and into future possibilities with his talk entitled ‘Crane flies, opals, inverse opals and tomorrow’s photonics.’ 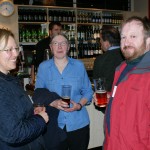 So with another BLCS AGM over and done with, what will Durham 2014 have in store for us?